Emily Austen is the latest in a list of sideline reporters fired from networks for making racial comments on TV.

The blonde was a Fox Sports Florida sideline reporter for Rays and Magic broadcasts. She really messed up when she made racially insensitive and anti-Semitic remarks during a live-streamed Barstool Sports show.

In the 35-minute video, Emily Austen said she “didn’t even know that Mexicans were that smart,” while discussing a story about a Texas valedictorian who announced that she’s an undocumented immigrant. Austen added that the “Chinese guy is always the smartest guy in math class,” and that when she “used to talk to Jews in Boca,” they “would complain and b—- about everything.” She can also be heard calling Cleveland Cavaliers forward Kevin Love “a little b***ch” several times. Can you say, what was she thinking!

Fox Sports Florida issues a statement saying, Austen was in no way speaking on behalf of Fox Sports. The blonde got the boot according to the statement, which reads, “Emily has been advised that her comments were unacceptable, and she is not scheduled to appear on any upcoming Fox Sports Florida or Fox Sports Sun broadcasts.” 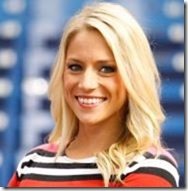 The Tampa native knew at an early age she wanted to be a sports journalist. Emily Austen began working for Fox Sports Florida in March 2015. She is a Florida Atlantic University graduate, she holds a  B.A. in Communication- Multimedia Journalism and a minor in Spanish. 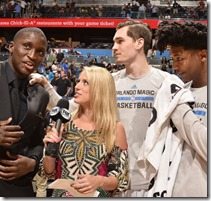 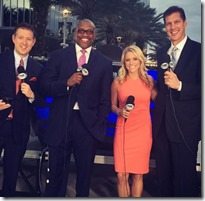 Austen worked as a digital reporter for the Celtics before moving back to Florida.

According to her LinkedIn, she covered daily practices and games, the NBA Draft, off-season workouts, summer league, and more. She was also the host of the team’s American Express HomeCourt Advantage pregame show on Celtics.com as well as the in-arena reporter. Emily has conducted several sit-down interviews with current and former Celtics’ players and coaches, including the legendary Bill Russell.

From 2012 through 2013, Emily worked as a sports anchor/reporter for KAMR NBC 4/KCIT Fox 14 in Amarillo, Texas. During her time there, she also co-anchored Fox 14’s ‘The Locker Room’ for Friday Night Football.

The blonde sure knows a thing or two about being competitive. She is a former cross country and track teams member. As an Owls for four years, Emily was awarded numerous academic honors and graduated college with a 3.9 GPA.

The self described dog and travel lover is also worked for the Golf Channel in Orland and is an avid player. Curiously enough, she is into Mexican food, could her love for tacos apologized her comments?