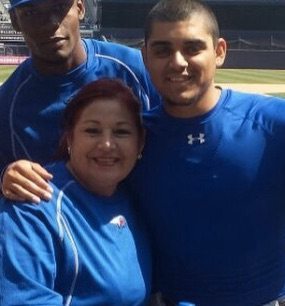 Guadalupe Osuna has been called her son’s love of his life. Mrs. Osuna is the proud momma of Mexican MLB pitcher Roberto Osuna who is the young talent with the Houston Astros.

Roberto Osuna Sr. pitched for over two decades in Mexico, money was enough for supporting her family and her in-laws, but as time went by so did the cash.

Her husband found a job picking up vegetables, but the pay was hardly enough. Her eldest son was 12 when he decided to drop out of school and help his dad picking up crops.

Hard times in the fields, but just the thought of being able to help his dad and bring food for his mom and siblings made it all so worthy.

“The bus picked us up at 4:30 or 5:00 in the morning and took us to Juan Jose Rios. We were so poor. We ate some eggs in the morning and beans. That’s all we ate the whole day. And we ate some tomatoes from the fields. We had to save some money and bring it back home. It was tough, but I learned from it.”

She couldn’t feel more proud, yet it saddens her that her kid quit his studies, work instead of playing. Tears run freely down her cheeks every time she and her youngest sons talked about the sacrifice he did.

“He left school for us and worked hard to reach his goal of being in the majors,” his brother Alex says. “Now we’re at a good school and have a good house, and I thank God that he did it.”

However, she did enjoy watching the two Robertos playing baseball together, it was sort of magical to see them pitching, perhaps he could become a pitcher like her husband, Guadalupe Osuna thought to watch her precious son.

Not only he did play with Diablos Rojos del México in Mexico, but he also signed a contract with the big fellas.

Osuna was 16, when in August 2011 the Toronto Blue Jays acquired him for $1.5 million, was that a dream? nope, it was really happening, but soon a dark cloud darkened the light shining on her son.

He suffered a torn his ulnar collateral ligament, an injury in May 2013, a Tommy John surgery was the only solution, but young Osuna feared that was the end for him in the MLB or baseball whatsoever.

Guadalupe and her husband were by his side when he underwent surgery, but that wasn’t the end, a long and hard rehabilitation was the next step, she knew they had raised all of their children well, taught them to fight until their last breath. Roberto would recover from the situation.

And she was right, slowly but surely he got better and pretty soon he was in the best shape. These days, Roberto Osuna is not just the youngest pitcher to appear in a game for the Blue Jays; but he is also their deadliest weapon.