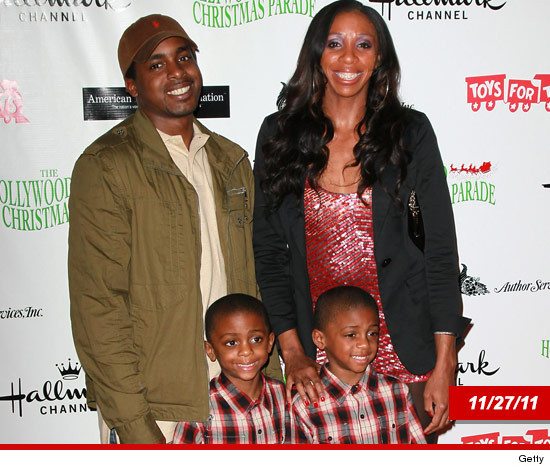 Jamel Mayrant and Lashinda Demus met through a mutual friend and were married in 2006. They had twin boys in 2007. Jamel attended the University of Arizona where he ran track, and Lashida went to the University of South Carolina. Lashinda has work very hard after the birth of her boys to get back into shape and regain her world class position in hurdles. Jamel was serving for some time as her agent.

After seven years of marriage, it’s not looking good for this couple. In fact, it’s looking pretty bad! Demus just got a restraining order against Jamel claiming he tried to strangle her and that he threatened her, their children and her parents. A few weeks ago, Jamel was arrested for domestic violence during which Lashinda claims she was left with bruises and a lump on her head.

She also claims that he is ruining her career, as an athlete cannot have scandal attached to her name. It could be damaging to her career. The restraining order requires Jamel to remain 100 yards away from his family.

These days, athletes seem to be becoming increasingly aggressive. Jamel,  who was less successful than his wife at his sport, might be feeling frustrated, but violence in the home really has no excuse, especially when it affects the children.  Dontay and Duaine may have to grow up without their dad.