Meet Kara Elaine Falkenstein; she is the lovely wife of sports exec, Jamie Horowitz. As noted, her husband was until recently the head of Fox Sports programming. He was eventually fired due to allegations of sexual assault.

The first thing you need to know is that Kara’s hubby, a top exec who was reportedly terminated due to an investigation into sexual harassment. Therefore, her hubby and father of her children lawyered up in order to fight his firing.

Read below some interesting facts about the sports exec wag, Kara Elaine Falkenstein. 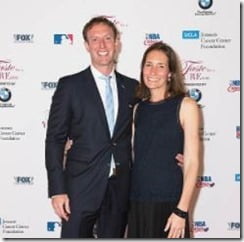 Kara is the daughter of Lois and Stanley Falkenstein grew up in Manchester, Conn.

2. She is well educated.

She graduated from Loomis Chaffee 1995 and subsequently, from Colby College in 1999. In addition to her B.A. in political science; Kara studied at the London School of Economics and Political Science.

3. She worked as a producer.

Kara initially, worked for about seven years in different positions at NBC Universal Inc., NBC, CNBC. She is a former segment producer at CNBC in Englewood Cliffs, N.J., where she worked on ”Morning Call,” a weekday program that covers business news.

4. Involved in the nonprofit world.

Another40-year-old Kara Elaine Falkenstein is the communications director for Iraq and Afghanistan Veterans of America, a nonprofit organization in New York.

5. Married for a decade.

Furthermore, Kara became Mrs. Horowitz in 2007.  The couple tied the knot during a ceremony performed by L. Sandy Maisel, a professor at Colby College, according to their wedding announcement.

Kara and her hubby welcomed the first of their three children in 2008. Together they are the proud parents of three small sons.

7. At one point she became the family’s only breadwinner.

According to Dailyentertainmentnews, her husband was fired from his post at the Today Show after only 10 weeks of landing the gig back in 2014 –leaving his wife as the main supporter.

To be true the allegations against Kara’s husband, what do you think she will do. In conclusion, can she forgive and forget?

Check out the lovely wife and mother of three on Facebook here.