Monica Giavanna is the girlfriend of NFL player, Jalen Ramsey -currently a cornerback with the Los Angeles Rams.

Monica’s 6’1″ cornerback beau was born October 24, 1994; the Smyrna, Tennessee native was born to parents Lamont and Margie Ramsey. He has an older brother named Jamal who’s also a football player.

Jalen was both a football and track star at Brentwood Academy in Brentwood, Tennessee.
He began his collegiate career at Florida State University in 2013. He started all 14 games as a true freshman and helped the Seminoles win the 2013-14 BCS National Championship. He was a First-team All-ACC selection as a sophomore in 2014.
Jalen was considered to be a top ten pick by the NFL and was selected fifth overall in the 2016 NFL Draft by the Jacksonville Jaguars. He played with the Jaguars until this October, when Ramsey was traded to the Los Angeles Rams in exchange for a 2020 first-round pick, a 2021 first-round pick, and a 2021 fourth-round pick.

Prior to Monica, Ramsey was romantically linked to Breanna Tate -who is the mother of the couple’s daughter Breelyn, born on July 31, 2018. Jalen and Breanna welcomed their second daughter, Brooklyn in September 2019. He is said to have left his baby mama -while she was pregnant -for new flame, Monica. 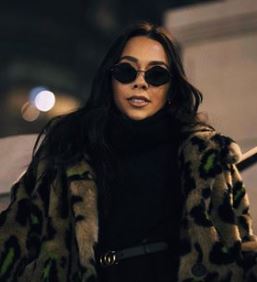 Monica Giavanna and Jalen are now social media official with the couple sharing their first snap together. The brunette stunner who is based in Las Vegas is a dancer and model.

Monica was born August 20, 1992. She is a talented dancer who appeared on an episode of East Los High in 2016. She also perform at the 2017 MTV Movie Awards. Also in 2017, she was a backup dancer for pop singer Austin Mahone. Most recently she’s also done backup dancing for Gwen Stefani. As a model, she appeared in a Wal Mart commercial that was directed by Seth Rogen.

On social media, she describes herself as a dancer, performer and model. The Peen State University Alum, is currently represented by Bloc Talent agency in Los Angeles.
Prior to her buddin relationship with the NFL player, Monica Giavanna was romantically linked to R&B performer Johnny Erasme.
The new NFL wag is active on social media where she has over 20k followers.
Find Monica Giavanna on Instagram here.