Alexander Zverev is the German tennis star who is described as the future of tennis. Also known as Sascha, Zverev was born on April 20, 1997, in Hamburg, Germany. Over the course of his career, we have seen Zverev turned into an amazing tennis player, also you probably have seen Zverev dating pretty girls, like Olga and Brenda, but who is Alexander Zverev’s girlfriend in 2021? 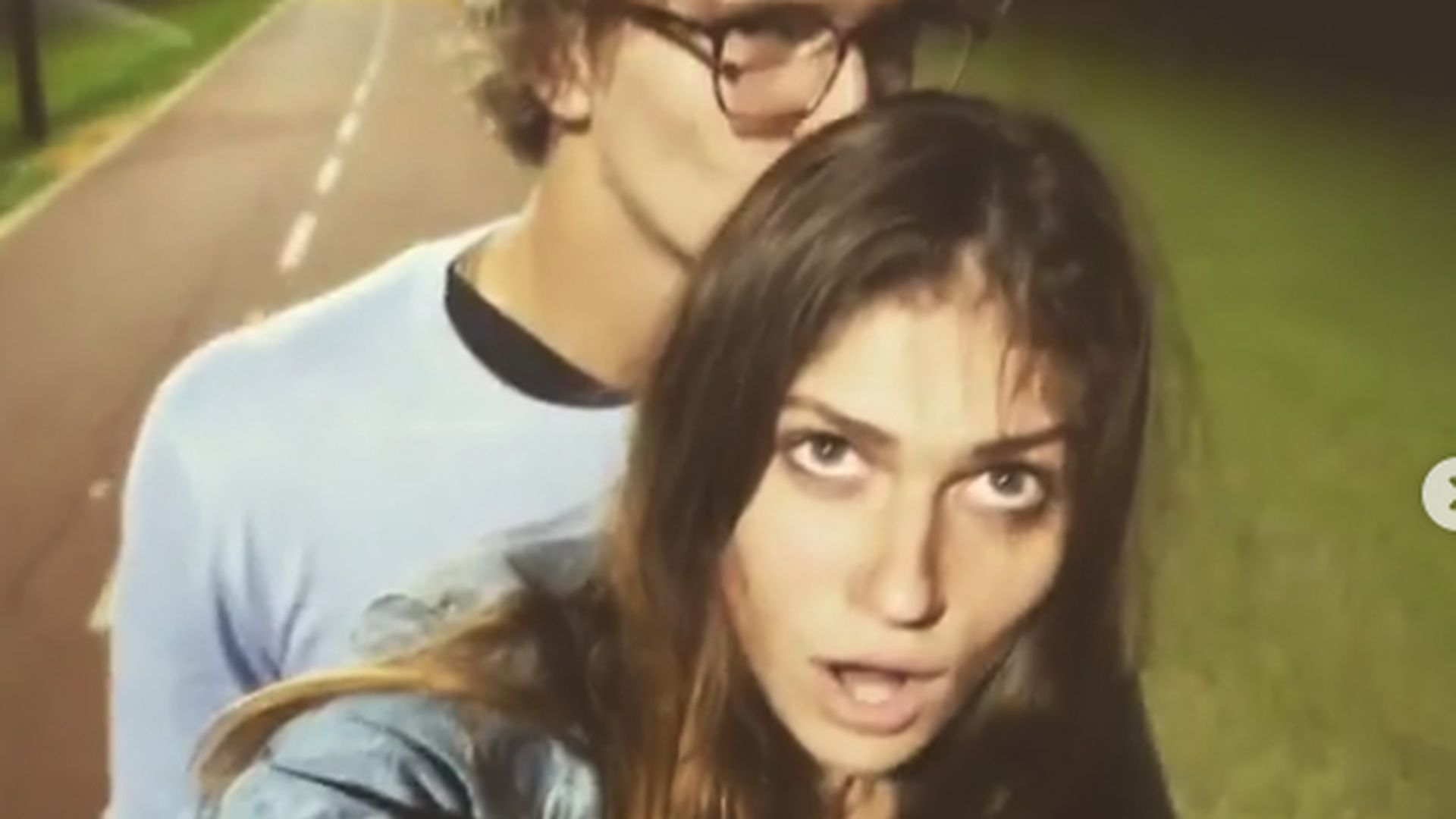 Sasha said he and Olga have known each other since they were children, he said this after Olga accused him of domestic violence during the time they were dating (2018-2019). Ms. Sharypova recalled the time when they were in New York for the 2019 US Open and Zverev became violent towards her, just because she got delayed along with Daniil Medvedev’s wife Dasha Medvedeva.

“I was afraid that someone might see and hear us. But in the end, I managed to break free, and I ran off barefoot.”

Olga said that in addition to smothering her with a pillow Alexander would tell her the most horrible things before she ran away from the hotel barefoot, and called a friend to come and get her.

“It was really hard. He was pretty toxic, telling me terrible things, saying ‘You’re nobody,’ saying, ‘You didn’t earn anything in this life. I’m a successful person, I earn money—but you’re nobody. He told me that no one cares about me [Olya], no matter what he [Zverev] does to me.”

Sharypova said the first time he turned violent was in Monaco in 2019. She tried to break free several times, but he always found a way to get her back.

“Whenever I wanted to break up or quit, I would stop talking to him or put him on my phone’s block list; he would still reach out to me through my friends or family members,” Sharypova recalled.

“I’d be in Moscow with my friends, doing nothing, just meeting each other to talk, and then Sascha would start calling me. I’d say ‘Sascha, I’m with my friends, can I spend time with them?’ He’d say, ‘No, you need to talk to me. I’m important. I’m not important to you?’ I’d say, ‘I want to talk with you, but later. Can I call you back in a few hours?’ ‘No. I’m not important to you? You don’t love me? You don’t want to spend time with me?’”

Her full story was published by RaquetMag.com

Living between Moscow and New York, Olga Sharypova once a tennis player is nowadays a photographer. Olga started playing tennis at the age of five and trained with Andrey Rublev‘s mom Marina Marenko.

“I was a very active kid,” Sharypova tells me as she begins her story, drifting between English and her native Russian being translated by a friend who joined us in the living room. “I loved tennis in the beginning.”

Olga quit tennis when she turned 15, she said she wanted to try other things, she felt interested in, poetry, reading, psychology and then she found photography.

“At 15 I thought that the world is big, and I want to know another part of it,” she said. “I’d already played tennis; I’d spent all day long on the court, I’d think about tennis all day long. I had no time to learn anything else, but I wanted to.”

“I like to take pictures of people, and show how I see this world,” she said. “Every human sees this world differently, from their own perspective. That’s why I chose photography, to show mine.” 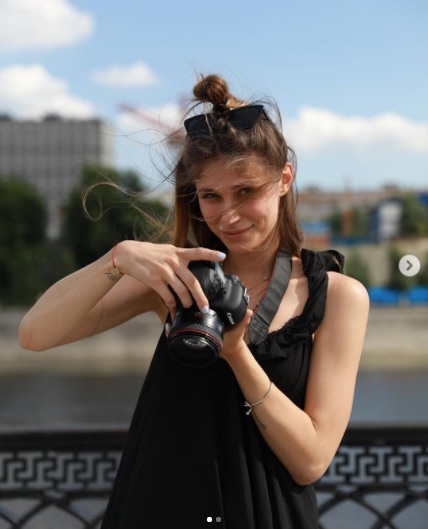 As noted Alexander dated Olga Sharapova on-and-off between 2018 and 201; they initially met each other when they were 14, dated briefly at age 15, but lost touch after she quit tennis that same year, and reconnected six years later. They started dating for the second time on September 5, 2018.

“We started chatting and after he asked me to come to Monaco to see each other,” she said. “We started dating for a second time.”

You can see more about read about Olga Sharypova in our previous story about her. 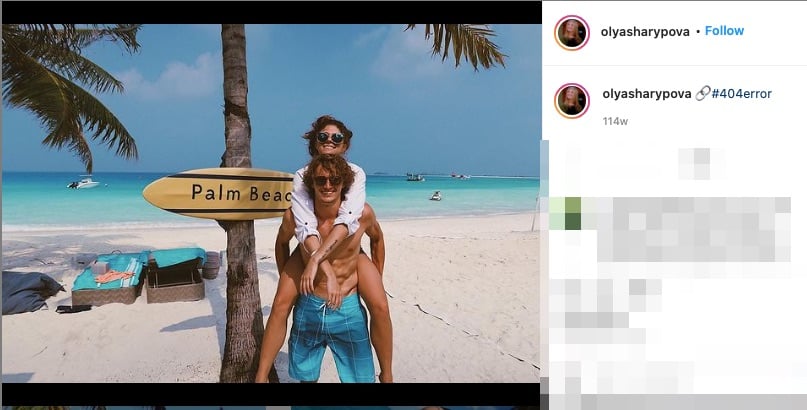 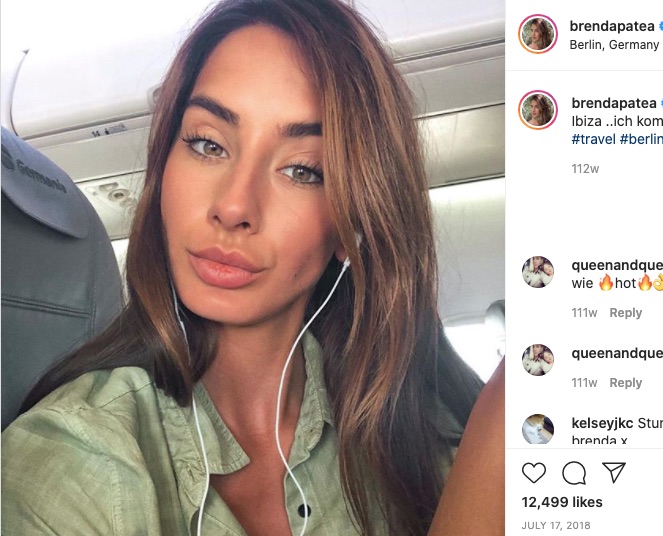 He later dated German model Brenda Patea, these two put their relationship in the public eye in November 2019.

We discussed whether to keep our relationship secret or to declare it. As a result, we decided to let everyone know, because we can handle it, ”

But by July 2020, they went their separate ways; according to sources, the first sign of their breakup came when Brenda not only unfollowed Zverev on Instagram but also deleted all of his photos from her account.

Brenda Patea was born Brenda Hübscher, on  September 2, 1993, in Berlin, Germany. She is of the children born to Heike Hübscher.

Prior to Brenda and Olga, it was rumored Zverev dated fellow tennis player, Belinda Bencic and there were rumors of the two of them being a couple back in 2015.

Brenda and Zverev split up in August 2020, but it seems that they continued to see each other sporadically, because, in October 2020, Brenda Patea announced she was pregnant and that Alexander was the father. She is expected to give birth early in March.

“I am 20 weeks pregnant and I am expecting a child from Alex. There was a crisis before because we have different views on life. Whoever lives by the side of an athlete has to submit, ”

“The child was not planned, but I’ll do everything to ensure that it grows up in a harmonious environment. I am in the fortunate position of being able to raise the child by myself. ”

“I’m pregnant and I’m really happy about it,” she said. She also addresses the issue of custody: “I want to have sole custody of the child. I also have valid reasons for this, but they are private. ”She also clarifies:“ I have no contact with Alex. But I would like to make it clear that if he is looking for contact with the child, I will not prevent that – on the contrary. “ 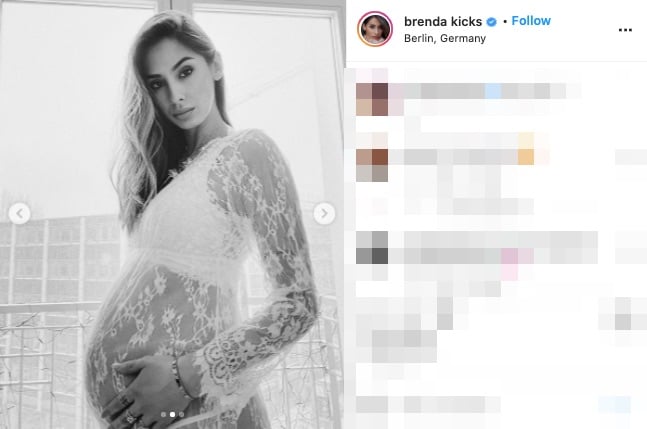 For his part, Zverev confirmed he is going to be a father and also denied the allegations made by his ex-girlfriend Olga Sharypova. 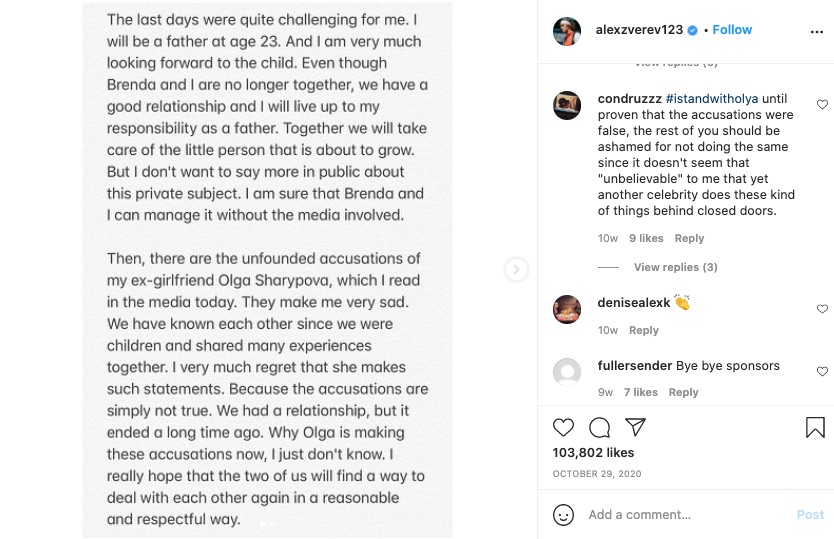 Zverev is not dating anyone in 2021, at least not at this moment, he is fully concentrating on his career, and is not talking about Olga’s accusations which he vehemently denies, and he is not telling much about the baby he is having with Brenda.

“Nowadays, with the force of social media, you can assign anything to anyone,” Zverev said about the allegations. “The more I talk, the bigger and longer the story would drag on.”

That is a very special feeling for everyone in the world. It will be the highlight of my life. We know but we have decided not to say it (the gender of the child) yet,” Zverev said.

A statement was released however by Bela Anda, the crisis management public relations specialist, Zverev is working with.

“As you know, Alexander put out a statement on Instagram last week and he stands by this statement. Therein Alexander Zverev has commented on the accusations of Mrs. Sharypova, who he has known since childhood and had a relationship with, that ended a long time ago.

Mr. Zverev regrets that Mrs. Sharypova continues to feed the public without having spoken to him. We are still working towards achieving the reasonable and respectful dialogue Alexander mentioned in his original statement.”