26-year-old Dallas is the wife of Reds starting pitcher Mat Latos. It’s an understatement to say this young wife is an outspoken woman, she definitely does not need her former Padres-pitcher- husband of three years to make the headlines, for her to get some attention that is for sure; she does a fine job on her own.

Dallas, started modeling, dancing, singing, acting, doing voice-overs and involved in pageantry since age six. The 5″ 9″, sometimes blonde, tanned bombshell is experienced in almost all different types of modeling from runway to promotional to fit modeling to catalogue shooting for high-end boutiques to glamour, swimsuit, etc. Although on her modelmayhem profile she explains she never pursued modeling as a primary career but rather as a hobby, we can not denied she did a great job.

Dallas and her hubby tied the knot secretly on December 10, 2010 at the County recorder’s office, they first met through her then-roommate and Mat”s friend. Dallas not interested in dating an athlete refuse to even meet him during a 2-year-period.

Saint Mary’s college of California and got a B.S. in Business and Economics. After graduating she did an internship with LightRiver Technologies which resulted in a full-time position. She was was simultaneously doing contract business consulting, business event planning while modeling on the weekends.

Back home for health issues; she successfully turned a venue that had always failed in a small town into a business profiting $7-8000 in bar sales on a single weekend night. She also worked for a local business as an Executive Assistant and business consultant.

Dallas’ better half was traded to the Cincinnati Reds last December and it went down as one of the biggest swaps in MLB history. As a result the couple had to relocate to Cincinnati and bought a home last April.

Now in her new home, she has no more contact with the corporate ladder but instead she has an official MLB.com-affiliated blog called “So I married a Baseball Player” (Behind every married baseball player is a woman who didn’t know what she was getting herself into).

She has been described to be a “bit of a wild child” with tattoos on both arms and with snakes as pets. Over seventy reptiles to be exact. She’s a straight shooter and if you offend her or disrespect her… she’ll let you know about it! 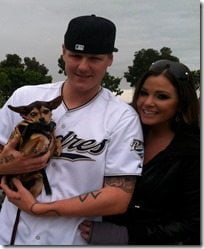 She has also been accused of having a “bipolar Twitter” having deleted it more than a couple of time. She inevitably announced that her Twitter account would be deleted and in fact she did but couldn’t help to be active in social media.

The model-turned-baseball-blogger travels with her husband constantly so they are only hours apart.

Latos who seems to have been quiet, took to twitter claims that she was victim of a during Tuesday night’s wild-card game. According to her own words she was “ambushed, grabbed by the hair, drug down and punched in the head multiple times” by a Pittsburgh Pirates fan.