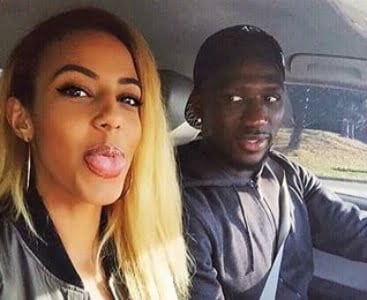 This lovely young woman is  Marylou Sidibé; she is the gorgeous girlfriend of French soccer player Moussa Sissoko. The 6’2″ Le Blanc-Mesnil native is currently a midfielder for Tottenham Hotspur.

Prior to joining Tottenham in 2016, Sissoko played for Newcastle United and Toulouse; he started his career with Esperance Aulnay in 1995 at age 6. Moussa later played for Red Star, before he returned to Esperance Aulnay, he eventually signed with Toulouse in 2003.

In addition to the Premier League, Sissoko played for the France National Team.

As noted, Moussa Sissoko’s girlfriend is the lovely Ms. Sidibé.

Marylou Sidibe, born on March 17, 1990, in Seine-Saint-Denis, France; a graduate of Inseec Business School is also a former member of France Taekwondo Team. She competed in the French version of Survivor, Koh-Lanta: Malaysia, in 2012.

At that time, Marylou no longer a member of the Taekwondo team was working as a stewardess. She has been photograph with Sissoko several times, and she has been seen cheering for him regularly. Sidibe is nowadays a sports model & personal trainer in Paris.