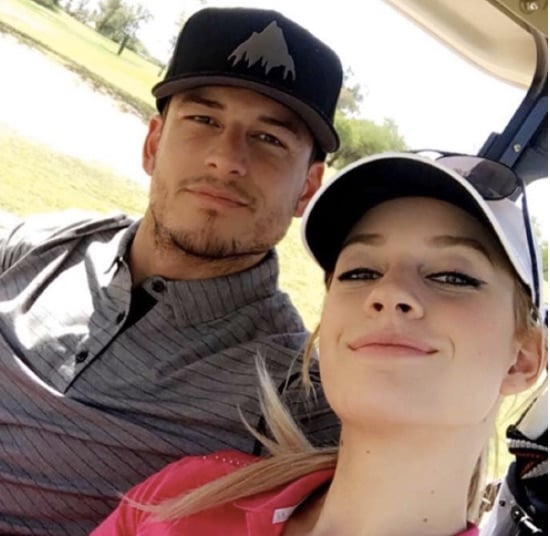 Meet the hottest gal in golf, she is 22-year-old Paige Spiranac! The golfer from Monument, Colorado has caused a major impact on the internet with her low-cut, skin tight outfits. But wait for a second guys, the lovely Paige is off the market, she is engaged to Steven Tinoco

Just before telling you what we know about Steven, check out Paige

Just before we can tell you about lucky Steven, shall we learn a thing or two about his soon-to-be wife? She recently graduated from San Diego University where she majored in communications and helped the golf team win the Mountain West Conference Golf Championship.

Last week she Won the Colorado State Match Play tournament! And was medalist with a 68.

Besides being a rising golfer she is a self-confessed fitness addict and we are not complaining! The blonde has her Instagram filled with snaps of herself showing her great shape.

According to her college bio, she comes from a very athletic family. The gorgeous blonde is the daughter of Dan and Annette Spiranac. Her father played free safety on the 1976 Pittsburgh National Championship football team while mom used to be a professional ballet dancer. She has a sister named Lexie –who competed in track and field and crew at Stanford.

Paige used to be a gymnast, she spent time at the U.S. Team Training Center at the Karolyi Ranch but decided to focus on golf according to Foxnews, she said once ““I absolutely love golf. It totally beats doing back handsprings on a 4-inch (balance) beam and defying death.”

Spiranac has found success in golf, she has won a number of awards and medals, now she’s hoping to earn her spot on the LPGA Tour alongside the best female golfers in the world.

With that neatly noted, are you ready to find out about her man  Steven Tinoco

6’0″ Steven Tinoco was born April 11, 1988, in Coto de Caza, California, to Robert and Paula Lynch. Tinoco graduated from Tesoro High School and from Long Beach State with a Major in criminal justice in 2009.

He was selected in the 34th round selected by the Tampa Bay Rays of the 2010 Major League Baseball draft. Steven started playing for the played for Hudson Valley (New York and Pennsylvania League) in Class A.