Julia DeMars is the younger sister of UFC Ronda Rousey! What’s the best thing about having your older sister being a badass UFC chick? Taking you to red carpet events and meeting your favorite star has got to be in the top three!

The 28-year-old champ approached the 21-year-old singer to ask for a photo of him with her little sister, but the What Do You Mean singer snubbed both of them by saying: “I’ve already taken a billion pictures today, OK?” It all went down at the Cannes Film Festival. A total bummer! 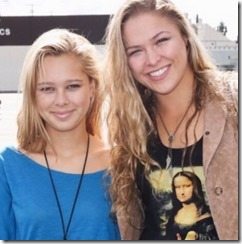 17-year-old Julia DeMars Rousey is the youngest child of AnnMaria De Mars. Her mother had a decorated Judo career and was the first U.S. citizen, to win a World Judo Championship in 1984.

Julia has three older half sisters, Maria Burns-Ortiz, Jennifer and Ronda Rousey. Sister Maria Burns-Ortiz is known sports journalist who serves as the social media columnist for ESPN.com and as a contributor to Fox News Latino.

Julia DeMars is surely blessed with good looks, giving her resemblance to big sis Ronda she she was able to star in a promo for UFC 193 pretending to be a young Ronda.

Julia is a senior at Villanova Preparatory School in Ojai, California where she plays soccer. Accoridng to her mother’s blog, Julia plays at both the school and club level, the proud mother wrote about Julia’s accomplishments last March: this week, she was accepted on a club soccer team, turned 17 years old, took her SAT and was awarded a scholarship (again) for her fourth and final year of a college prep.