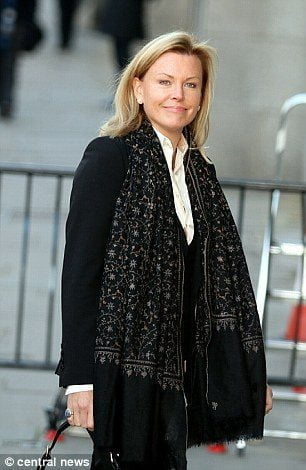 Eimear Wilson and Colin Montgomerie met when she was 17, in Troon where they both grew up. In case you didn’t know, Troon is a town in South Ayrshire on the west coast of Scotland. They married in 1990. She was going to study for a law degree, but put her ambitions on hold to support her husband’s career and to raise their three children, Olivia, Venetia and Cameron.

Their relationship was considered to be one of the strongest in the sport until the winter of 2000 when Eimear told her husband she wanted a divorce. ‘I was the one who encouraged him to the hilt in his career but it got to the stage when Colin’s career was all consuming,’ she explained. ‘The cracks which we had both tried so hard to paper over were becoming impossible to ignore. I was emotionally and physically fatigued. I told Colin it was over.’They took a family vaction to Barbados to see if things could be mended, but when they returned, she barred him from the family home. They separated. In 2006, the couple agreed to a clean break divorce settlement of £8 million, in return for Eimear giving up any claim on Colin’s future earnings.

For a time Eimear’s name was linked to many different men, including Hugh Grant, but these rumors where never confirmed.

Eimear and Nick Cook met at a drinks party a couple of weeks before Montgomerie agree on the divorce settlement. Millionaire Cook was immediately smitten by her. He also was divorced having parted from his wife of 25 years seven months before. At the time his two children were 27 and 24.

They married on September 20, 2009. In spite of their age difference (he’s 17 years older than she) they have made a strong marriage and seem very happy together.

Eimear is testifying in the phone hacking trial against Rebekah Brooks and Andy Coulson.