Kelly Stafford is NFL  player Matthew Stafford’s wife, the quarterback currently playing for the Los Angeles Rams who previously played with the Detroit Lions. Before the NFL, Stafford played college football for the Georgia Bulldogs at the University of Georgia. 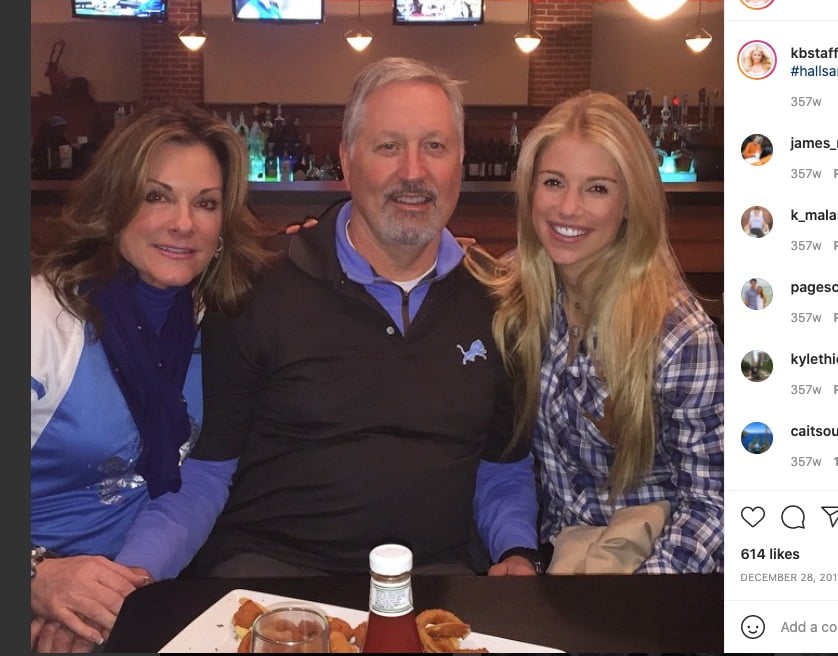 Matthew Stafford was born on February 7, 1988, in Tampa, Florida one of the children born to Margaret and John Stafford. Matthew’s mom Margaret was born Margaret Christian on April 30, 1957. 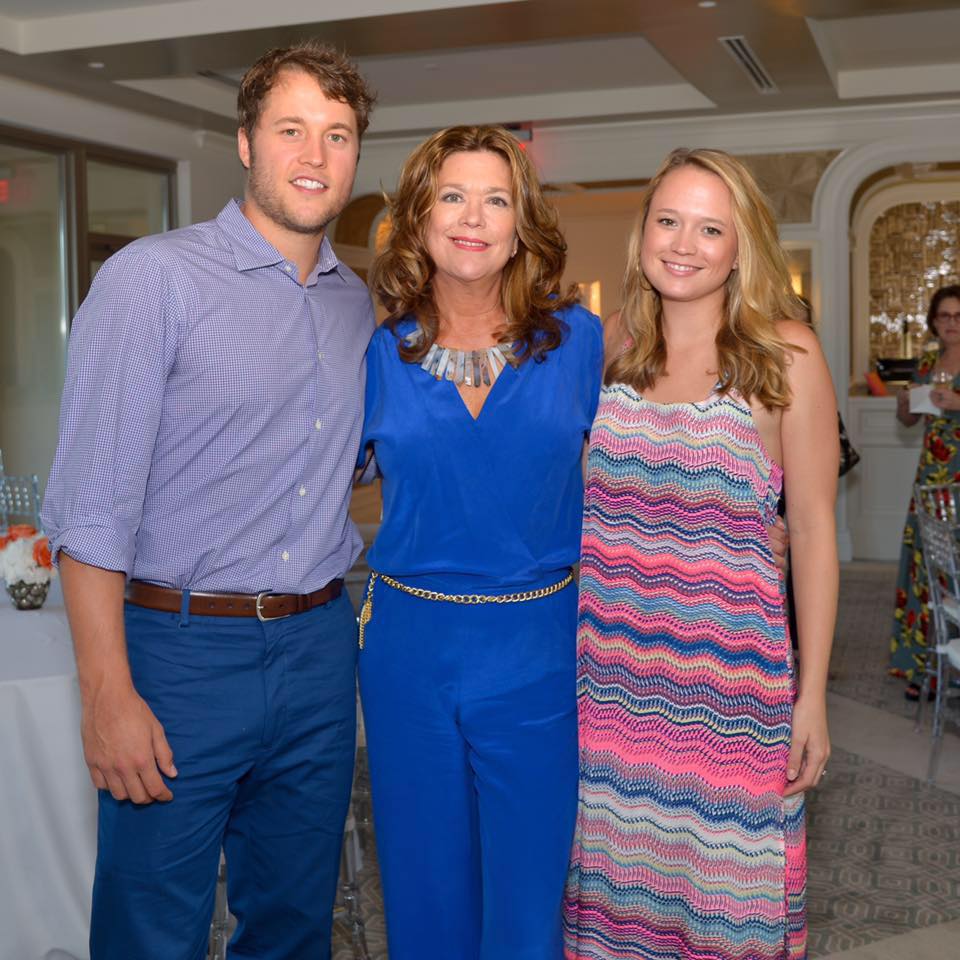 His dad John Stafford studied at Florida State Florida and the University of Georgia. he is the director of strategic relations for Blue Slate Solutions in Dallas, Texas 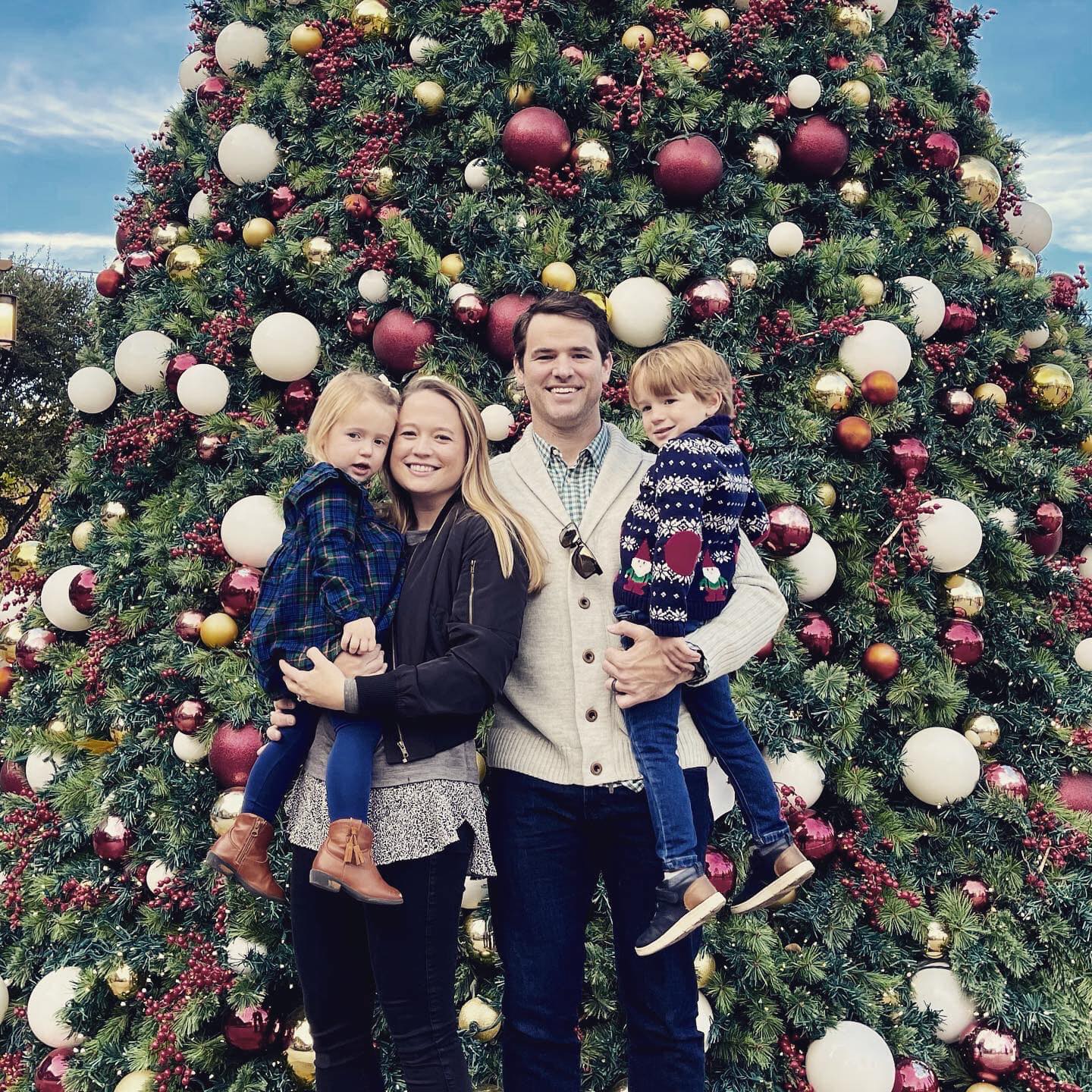 Matthew Stafford’s pretty sister is Page Elizabeth Stafford born onSeptember29, 1986. Like her dad and younger brother, Page Stafford also attended the University of Georgia, where she graduated in 2009, with a Bachelor of Arts in Print Journalism, English, and Literature.

Page Stafford now Page Stafford Clark is married to Dawson Clark, father of her two adorable children; she is an account supervisor at HCK2, before that she was the marketing manager for Omni Forth Worth Hotel and senior account exec at Forte Marketing.

Mathew Stafford graduated from Highland Park High School after his family relocated to Dallas. In January 2006 he enrolled at the University of Georgia, that first season with the Bulldogs he completed 135 of 256 passes for 1,749 passing yards and seven touchdowns. Stafford was twice named the SEC Freshman the Week, National Freshman of the Week by Rivals.com, recipient of the University of Georgia’s 2006 Offensive Newcomer of the Year Award, named into the 2006 SEC Coaches’ All-Freshman Team, and Offensive MVP of the 2006 Chick-fil-A Bowl.

Matthew Stafford has been  L.A Rams quarterback since the 2021 season. In March 2021, Stafford was traded to the Rams by the Detroit Lion in a deal that included Jared Goff, 2021 third-round pick, and two first-round picks in 2022 and 2023.

Matthew Stafford has been off the market for quite some time, his wife formerly known as Kelly Hall now Kelly Stafford has been part of his life since he was a QB at Georgia and Kelly was a cheerleader; they started dating in college and the rest, as you all know, is history. 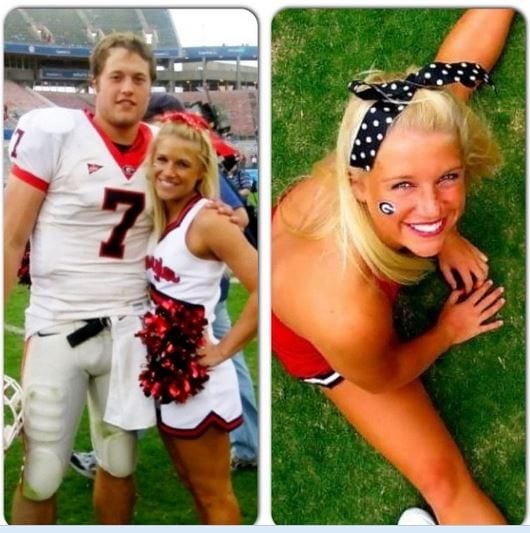 Pretty Kelly Stafford born on August 2, 1989, is the youngest daughter of Jay Hall and Leslie Hall, who are also the proud parents of Kelly’s older siblings Jennifer and Chandler “Chad” Hall.

Her dad, Mr. Jay Hall married to  his loving wife since July 10, 1982, grew up in Sandy Springs where he attended North Springs Charter School of Arts and Science, before he attended the University of Georgia. 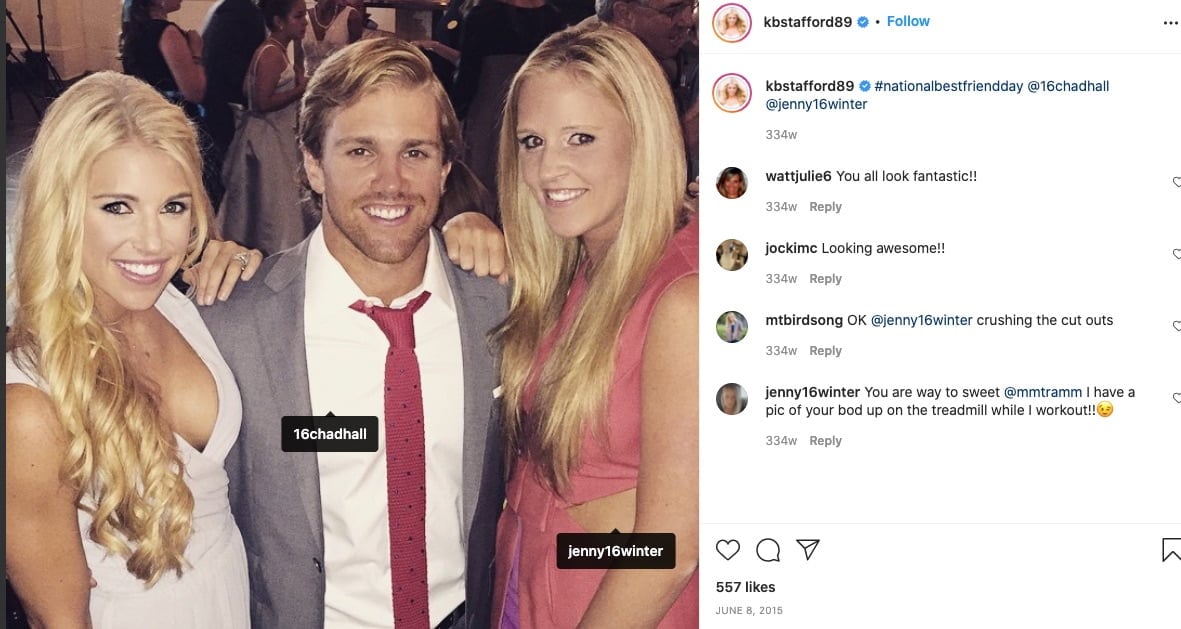 Kelly’s brother Chad Hall a former NFL wide receiver born on May 23, 1986, played for the Air Force Falcons at the United States Air Force Academy before joining the Philadelphia Eagles in 2010; two years later he joined the San Francisco 49ers, Kansas City Chiefs in 2013, and the Jacksonville Jaguars in 2014. 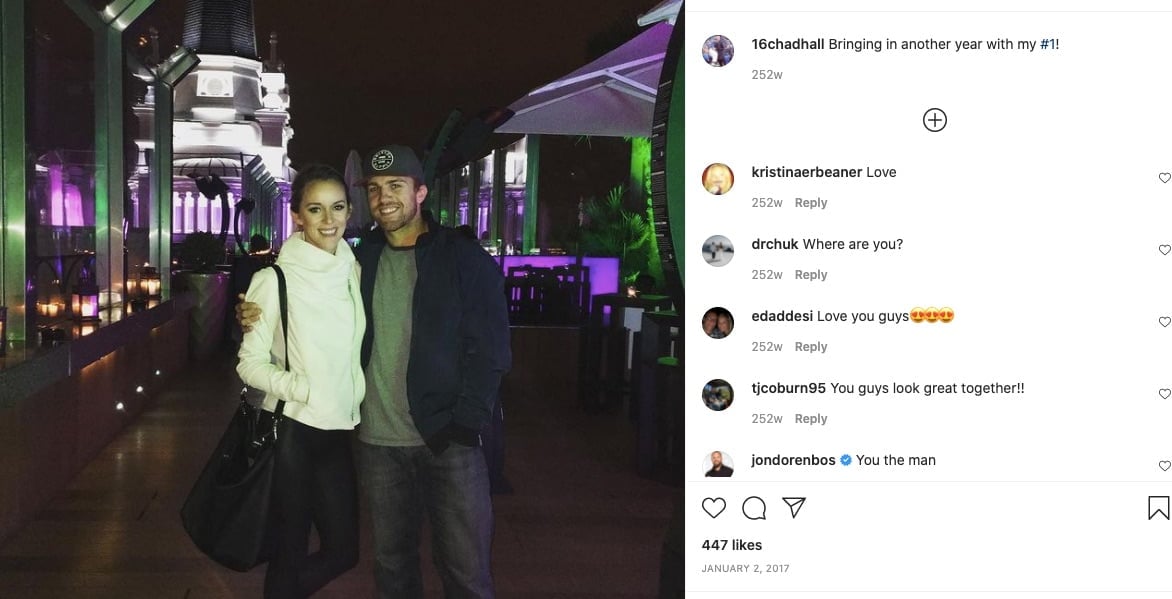 After his retirement, Chad Hall joined the Buffalo Bills’ coaching staff as their offensive assistant, since 2019, Hall has been a wide receivers coach for the Buffalo Bills. Chad and his pretty wife Rose Hall have one adorable daughter, Penelope, and another baby on the way. 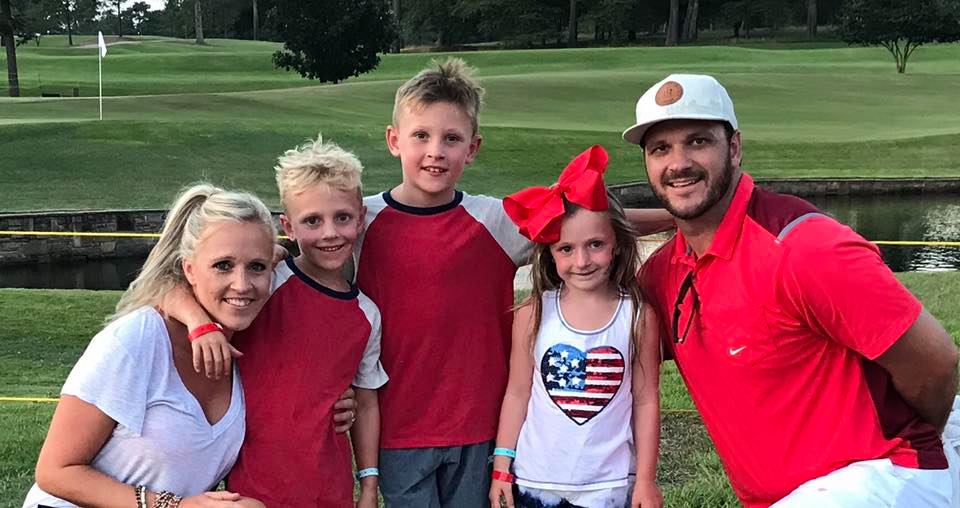 Kelly’s sister Jenny Hall, Jenny Hall Winter (since her marriage to Brian Winter), graduated from Wesleyan School and Florida State University; she was an account executive for The Beam Team. Jenny and her husband reside in Georgia with their three wonderful kiddos. 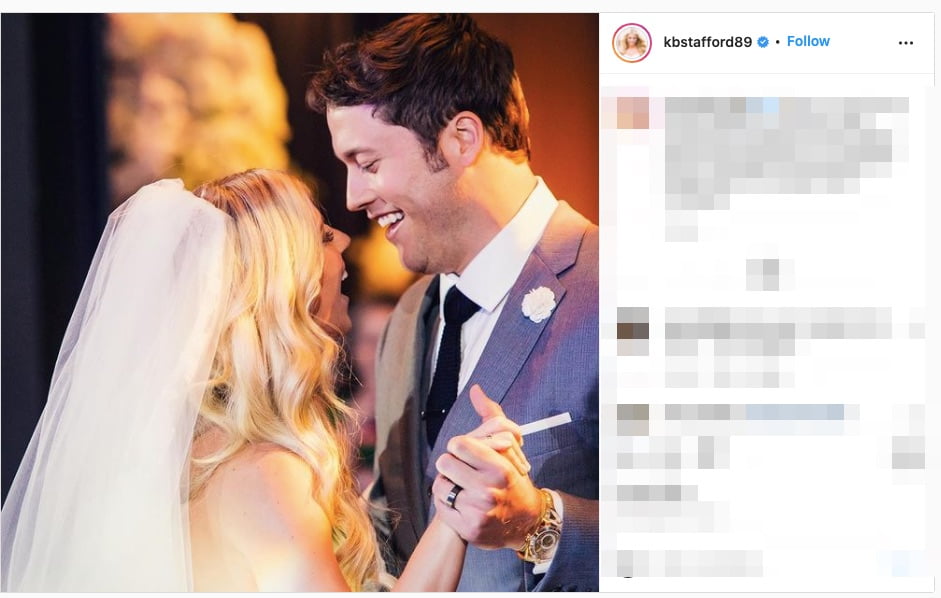 After one-year engagement, the big day finally came! Matt Stafford and Kelly tied the knot on April 4, 2015, in Georgia where the newlyweds met while he was the Bulldogs’ quarterback and Kelly a talented, energetic, and beautiful cheerleader. 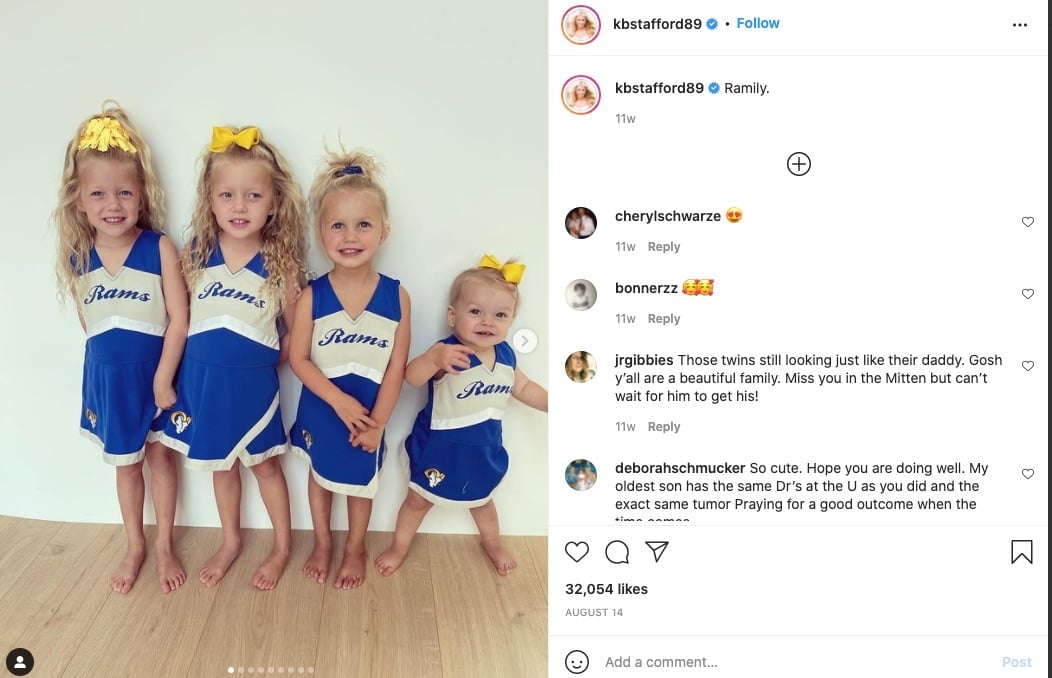 On April 3, 2019, Kelly revealed she experienced severe bouts of vertigo and later underwent an MRI that showed she had a benign tumor in the brain, called an acoustic neuroma. 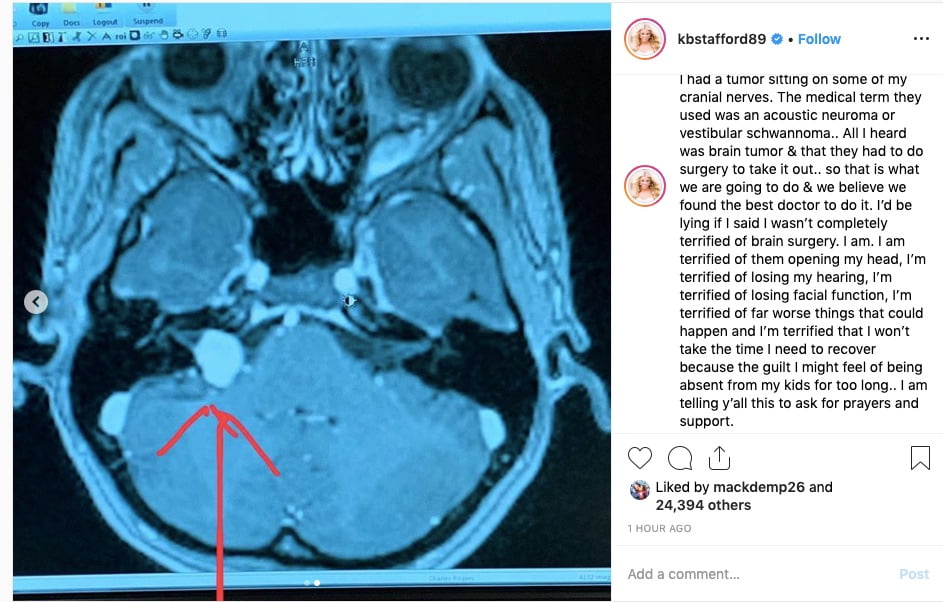