Al Iaquinta the martial artist/Long Island real estate agent –is set to appear in the UFC on FOX 31 main event –against Kevin Lee.

Al already holds a win over Kevin Lee, but it was nearly five years ago. Born as Alexander “Al” Jay Iaquinta on April 30, 1987; the New Yorker began his pro MMA career fighting for the well-known east coast promotion, Ring of Combat.

He’s been a professional fighter since 2009 and signed to the UFC since 2012.

Iaquinta began to make a name for himself as a cast member of ‘The Ultimate Fighter: Live,’ where he was an exciting prospect in the UFC’s lightweight division. After defeating future UFC signee Jon Tuck by decision to get into the TUF house, Iaquinta would become the first pick by coach Urijah Faber. He would pick up the first win for Team Faber in the season when he defeated Myles Jury by split decision. 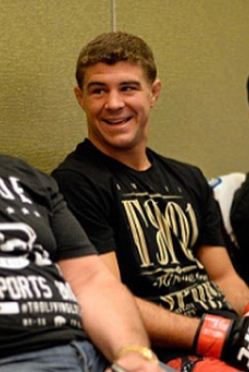 After UFC 169 –in which Al won over Kevin Lee –he faced Mitch Clarke at UFC 173 on 24 May, 2014. Clarke was able to submit Al laquinta early in Round 2. This submission earned Clarke his first Performance of the Night.

He got back into the win column when he faced Rodrigo Damm and defeated him via TKO late in the fight, at 2:26 in Round 3.  He would pick up two more TKO victories both in the second round over Ross Pearson and Joe Lauzon.

The 31-year-old has had a pretty successful career so far, both as a fighter and real estate agent –however it seems he hasn’t been as lucky in the personal department. Al who is active on social media gives no indication of being in a current romantic relationship. It seems he is super focused on his career and there is no special someone for the time being.