Ronnie -a singer, song writer and rapper known as the front man of bands Escape the Fate and Falling in Reverse, stepped up to defend his lady after WWE legend, triple H said during an interview that Paige ‘probably has some (children) she doesn’t know of’

The 27-year-old – real name Saraya-Jade Bevis – who retired from the ring due to injury in 2018, is still a prominent personality on WWE shows. In 2017, she was the subject of intense online attention and abuse after intimate videos and pictures of her were leaked.
36-year-old Radke who has been dating Paige since 2018, stated on social media that WWE should be ashamed of Triple H.

Ronald Joseph Radke was born December 15, 1983; the Las Vegas native first experienced music by covering the Blink-182 song “Dammit” on the guitar when he was a teen.
He found success in his early 20’s with the band Escape the Fate but was booted from the band after the vocalist was sentenced to five years’ probation for battery charges related to his role in the shooting death of an 18-year-old man in Nevada in 2006. Though the singer did not shoot the man in question, he spent almost three years in prison when he violated his probation by skipping an appointment with his parole officer. 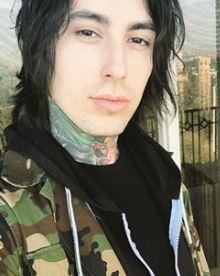 After emerging from jail, Falling in Reverse started to take off. The group issued their album, ‘The Drug in Me Is You,’ in 2011; the band won a top five album on the U.S. Alternative and Indie charts that year.
He’s also known for his solo work and has collaborated with numerous artists including Tyler Carter, Sy Ari Da Kid, Jacoby Shaddix among others.

Radke has been in a few relationships, prior to Paige, he was actually engaged to Emily Elison. He is also the father of daughter Willow Grace Radke with Playboy model Crissy Henderson. In 2015, he began dating Dash Dolls reality star Caroline Burt.