Jady Duarte is the Brazilian woman who apparently likes to kiss and tell! The 20-year-old has been identified as the other woman, after spending the night with sprinting legend, Usain Bolt.

Though Jady Duarte has told media she is “dying of shame” after the discovery of her night with Bolt, she shared the images via WhatsApp with friends, which eventually led to leaking and the snaps going viral. Her exact words were:

“It’s very negative. I never wanted to be famous, I’m dying of shame.”

The images show what appears to be the sprint king and Duarte together in bed. In another photo, Bolt appears to kiss Jady Duarte on the cheek. She insisted her time with the Olympian was “just normal.”

Jady Duarte has kept tight lip about her time with Bolt saying she doesn’t want to ‘complicate things.’ She might refer to the fact that Usain Bolt has a long time girlfriend. Or, she might also be avoiding even more spotlight on herself.

According to The Sun, Jady Duarte isn’t exactly just an innocent student. She has ties with crime. Jady happens to be the ex-girlfriend of a Brazilian drug lord named, Douglas Donato Pereira (aka Dina Terror) –who was responsible for torturing and murdering a teenage girl in September 2014.

From her relationship to Pereira, Jady Duarte is the mother of two-children. She was left a widow after Dina Terror was shot and killed by elite police last March. 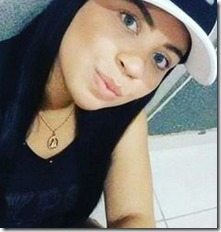 Following the death of her baby daddy, she posted on social media

“In eternity, I will be with my love the way I always wanted, because in heaven all the time is time to be happy. “God will take you in, it’s my hope that in eternity I will see you.”

Bolt turned 30 on Sunday and celebrated by partying until the early hours of the morning at All In, a club in the Barra de Tijuca suburb of Rio. The same place where Jady Duarte checked-in, as shown on her Facebook feed:

Jady Duarte and Bolt met while dancing the night away at the club. Shortly after they ended up in bed where the now infamous images took place.

Let’s not forget, the Jamaican sprinter wrote himself into the history books by winning the triple-triple in Rio, taking gold in the 100metres, 200metres and 4x100m relay. Will this major indiscretion overshadow his impressive performances?